I would be surprised if anyone thought that back in 1999 The Blair Witch Project would have such a lasting impact on the film industry almost a decode later.  It was new and something fresh that scared the hell out of everybody.  Obviously, this year’s Cloverfield made an impact on the film industry.  It set the record for largest opening weekend box office in the history of films released during the month of January.  This said, I would like to publicly state that I would not be surprised if we began seeing more films done in a home video format.  Clearly, it worked for The Blair Witch Project and now it seems to be working for Cloverfield.
Cloverfield is the film that no one knew anything about until just a few weeks ago when it was released.  The premise of the film is very simple: a big alien life-form wrecks havoc on New York City.  Basically it is Godzilla meets Blair Witch.  The entire film is done in such a way that makes the viewer feel like they are watching a home video because, really, they are (with the exception of the big alien attack).  A group of young adults are having a party.  The first twenty minutes of the film is just footage from the party that one of the partygoers created.  During this time a small the audience finds out that the person for which the party was thrown is having issues with the woman he recently broke up with.  After she storms out of the party, the movie really picks up.  The first twenty minutes of the film are rather boring; especially considering the fact that everyone in the theater is just wishing the alien attack would begin soon.  However, the love plot is vital to the rest of the film.
In the middle of the party, home camcorder still rolling, the alien begins its attack.  Everyone in the city is evacuated.  The only reason the film isn’t just thirty minutes long is that the main character miraculously realizes that he still loves his old flame and he is determined to film her before leaving the city.  The rest of the film is spent following the main character and his band of buddies around the alien-infested city while trying to film his old girlfriend.
Personally, I thought Cloverfield was fantastic.  Obviously, it is a fiction film but I found myself actually believing (sort of) that an alien was really attacking New York City. This realism is owed to a couple of factors.  The first is the obviously choice of filming style.  Sure, the filmmakers could have just made this another big budget alien flick with a bunch of big Hollywood stars.  However this had already been done with films like War of the Worlds and Independence Day.  A sense of falsified realism was added to this film because of the entire film being done with a home camcorder.  The other aspect of the film that was unique and made the film more pragmatic was the superb casting job.  Not a single actor or actress in this film was famous, or even remotely famous.  Casting all unknown performers was smart because it added that feeling that these people were real and just like the rest of us.  It actually made the film scarier and edgier to have unknowns in the lead roles.
In the end, I had many questions like “Where did these aliens come from?” and “What happened after the alien attacked New York?”  Honestly, I am glad these questions were never answered because it added yet another element of realism to the “home video.”  Obviously, the people in this home video don’t have the answers to these questions so why should the audience?  I give Cloverfield a B.

The Curious Case of Benjamin Button 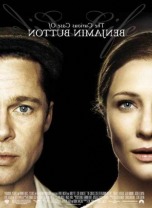 Forget the fact that Brad Pitt starred in the terrible film The Mexican or that the runtime for Benjamin Button is nearly three hours long.  The Curious Case of Benjamin Button is a rare and original gem.  I remember first seeing the trailer for the film several months ago and thinking I could not wait to see it.  It is one of those films that does not come around very often.  This movie has everything: great acting, engaging storyline, gorgeous cinematography, and a soothing soundtrack.  Everything in this movie just seems to come together seamlessly.
The Curious Case of Benjamin Button is about the man from the title who basically ‘grows and ages backwards.’  Benjamin Button is born in the early 1920’s with problems only old people would have.  His skin is completely wrinkled, his eyes have cataracts, and his joints suffer from arthritis.  Not surprisingly, his parents desert him by leaving him on the front steps of a house where an African American couple lives.  Button is cared for and raised by his accepting foster parents.  As the years go by he gets younger instead of older.  He even meets a young girl, Daisy, early in his childhood (or his old age years, whichever way you want to look at it).  As Button grows younger he travels the world and meets new people.  However, he always seems to run into Daisy at various points in his life.  Eventually, Benjamin Button marries Daisy (Cate Blanchett).  As you can imagine, problems arise as Button grows younger and Daisy grows older.
This movie is bound to evoke every emotion possible from the audience members.  As enjoyable as many of the moments are in the film, you cannot help but have this feeling of sadness from the moment Benjamin Button meets Daisy.  This is because you know their relationship cannot end well since both of them age in completely opposite directions.  However, Benjamin Button truly is a heartwarming tale because at its core, the movie is about being able to love someone no matter what the circumstances and to live each day to the best of your ability.  In terms of love, Daisy knows all along that eventually, she and Benjamin will be so physically and mentally different that there is no way they can continue to live as two lovers.  However, Daisy is always there from Benjamin throughout the entire film, even if only in spirit.  In terms of living each day to the fullest, Benjamin also knows that as he ages backwards, he only has a limited time to do certain things.  The moments in life that the rest of the world have to look forward to as they get older, Benjamin has to get out of the way early in his life.
The storyline and acting are terrific (easily one of Brad Pitt’s best performances), but the art direction and cinematography are equally spectacular.  There are a number of scenes where Button is sitting on the beach at sunset and you, as an audience member, cannot help but have your breath taken away by the brilliant sight.
This movie is one that I easily recommend to everyone over the age of, let’s say, 18.  Not because the movie is inappropriate, but because I am not entire sure that anyone younger than 18 will fully understand the movie or even fully appreciate it.  Also, I do not believe that this movie deserves the 13 Academy Award nominations it has received but it does deserve to be seen and adored by everyone.  I give The Curious Case of Benjamin Button a solid A.